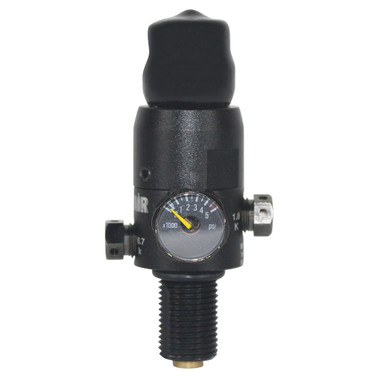 The WarriAir Paintball regulators from GladiatAir are a stylish matte black colour and incorporate a number of features to provide a high level of performance and reliability.

The WarriAir paintball regulator is pre-set with a standard output within the 700 - 900 PSI range. By removing 2 disc springs, output pressure range can be reduced to 400 - 600 PSI.

The 3000 PSI Reg has a slightly larger gauge than the industry standard, so it is easier to read the pressure.

The 4500 PSI Reg has a flow restrictor on the inlet supply (cylinder to reg) to reduce the chance of blowing the low pressure burst disc.

Both paintball regulators are fitted with a filter on the filling adapter to reduce the amount of dirt that gets into the tank, which should prevent problems associated with the paintball regulator not sealing due to particles on the sealing edge and burst discs rupturing.

This product hasn't received any reviews yet. Be the first to review this product!

All prices are in NZD. Copyright 2022 PAINTBALL DIRECT. Sitemap | Ecommerce Solution by BigCommerce